The Beautiful Desert Mirage of the Nullarbor 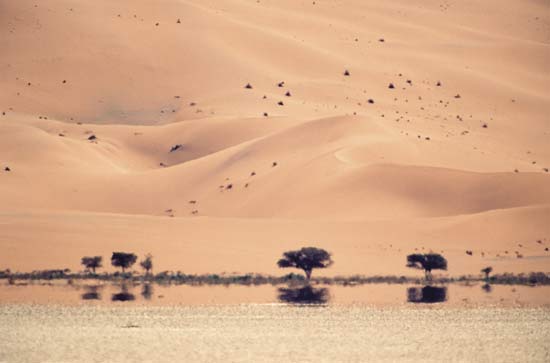 If you’re an avid reader of this blog, you probably know that the Nullarbor is a prime destination for anyone who’s out looking for an adventure. However, at first glance, the Nullarbor seems like nothing but a stretch of long road backdropped by an endless of arid land; it turns out, the place has all kinds of adventure in store for those who know where to look. It has beautiful surfing beaches, camping sites and historical caves.

As the adage goes, it’s not about the destination, but the journey. A lot of people see the long Eyre Highway drive as an adventure in itself—everything you get to see on the way: the animals, the plants, and the people—make up the entire experience. There is another curious feature worth noting in all desert-like environments, an interesting phenomenon we all know as the mirage.

Movies set in a desert have most likely taught most of us what we know about mirages. But scientifically, what is a mirage? 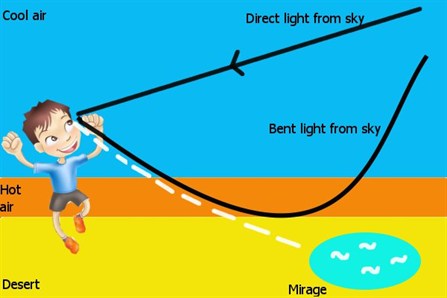 A mirage is a naturally-occurring optical phenomenon that involves the bending of light rays, resulting in a displaced image of distant objects or the sky. Since cold air is denser than warm air, in the event that the ground is warmer than the air above it, the light waves that travel through it are bent (refraction) into a U-shape. Since the brain doesn’t see the image as bent light from the sky — it thinks that the light travels in a straight line — it perceives the image as coming from the ground.

There are three kinds of mirages — the superior, the inferior, and the Fata Morgana. The distinction lies in the positioning of the hot air in contrast to the cold air: a superior image appears when the air below the line of sight is colder than the air above it. Since this is the opposite of the normal temperature gradient of the atmosphere, the light rays are bent down, and so the image appears above the true object (hence, superior). Superior mirages often appear in the polar regions — the probable source of tales about flying ships and coastal cities in the sky.

The Fata Morgana (coming from the Arthurian legend’s fairy shapeshifter, Morgan le Fay) is produced by a much stronger temperature inversion than the Earth’s curvature itself, resulting in a rapidly-changing mirage.

The inferior mirage, however, is where the Nullarbor’s mirages fall under. More commonly seen in deserts, the inferior mirage is a textbook example — it happens when the mirage is located under the real object, most often, the sky (or any distant, therefore, bluish) object in the same direction. Since hot air rises and cooler air descends, inferior mirages most often appear as unstable: layers mix, vibrate, or get vertically or horizontally extended. This is the reason why a desert mirage most commonly appears as a body of water in the distance, or spilled oil or water on a tarmac road.

The mirage is a fascinating natural phenomenon: one that would render anyone awestruck. The word comes to English from the French mirage, and from the Latin mirari, meaning “mirror.” The word is also the same root for “to look at, to wonder at.”

The Eyre is well-known for being Australia’s longest straight road. Paired with a long stretch of barren desert with occasional blasts of truck and car exhaust, the Nullarbor is a prime spot for the occurrence of inferior mirages.

Travelers setting out for the Nullarbor are warned of the dangers of these desert mirages. “The air shimmers and the roads look wet. For exhausted travelers in brutal heat, the appearance of an illusory lake in the distance cruelly raises then dashes hopes,” Lonely Planet warns.

It’s a familiar scenario in films: a thirsty, starving traveler uses his last ounce of strength to walk to an oasis, which turns out to be nothing but a mirage. The movies can do a number on your imagination, but if you’re traveling to the Nullarbor through a car, you have nothing to worry about. Just make sure you bring plenty of food and water, and enjoy watching bodies of water start forming on the horizon.

The Nullarbor’s nighttime mirages are a whole other thing altogether. The Min Min light is a common occurrence in the Outback, most commonly described as fuzzy, disc-shaped lights that appear to hover just above the horizon. According to this paper written on the phenomenon, these lights are so common in the area that they appear in Aboriginal legends as warning tales used to help control children, and for some reason, occurrences have been more common in the modern times. The paper explains that the lights are a form of Fata Morgana — a curious mirage.

Some witnesses describe the Min Min lights as appearing to approach them several times before retreating.

Crossing the Nullarbor is an experience of a lifetime, and it’s all about the journey. If you think you see nothing but a long road and a barren desert, look harder, because the Nullarbor is so much more than that. It’s a gem of a place.

If you want to make the most out of your Nullarbor trip, contact the Nullarbor Roadhouse. We’ll be happy to show you around!

* Believe your eyes: the world’s strangest optical illusions and mirages
* Min Min light
* The Min Min light and the Fata Morgana — An optical account of a mysterious Australian phenomenon